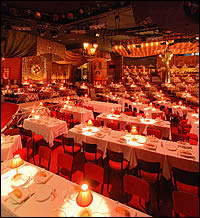 With feathers, rhinestones, sequins and its world famous cancan dancers, the legendary Moulin Rouge in Paris has charmed audiences for more than 100 years. Moulin Rouge, which means red windmill, is a cabaret built in 1889 in the Paris red-light district of Pigalle. The nostalgia of turn-of-the-century Paris, captured in paintings and movies, is still present in the décor of the Moulin Rouge Paris. You’ll feel transported.

The Moulin Rouge's current show features 100 artists, 1000 costumes, sumptuous sets, shimmering lights, as well as a giant aquarium. You can choose Moulin Rouge Tickets among many options with or without a full gourmet dinner including wine or champagne, pick up from your hotel or adding a tour of Paris before the show. The Moulin Rouge is a celebration of a bygone Paris. It is not to be missed.

The duration of the show itself is approximately two hours.