Hotels in Midnight in Paris Movie

Le Bristol
In the movie, Owen Wilson plays Gil Pender, a writer traveling with his fiance's family. Scenes of the family's hotel accommodations were filmed at Hotel Le Bristol in Paris. Movie goers will notice the beautiful features of the hotel suite from the soft, light colors to the Louis XV- and Louis XVI-style furniture. Only a handful of hotels have received the "Palace" designation by the French government, meaning they exemplify historic grandeur and possess a strong sense of place and architectural significance.

The noble design of the Bristol Hotel is enhanced by its 18th century furniture, tapestries and original paintings. Rooms overlook the garden or views of Paris sights. 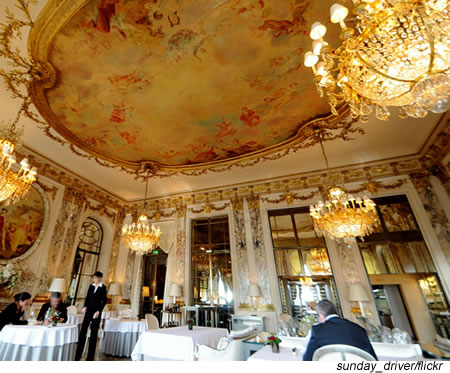 Le Meurice
The family's dining scenes in 'Midnight in Paris', a conversation at the hotel's entrance and a rooftop reception on the private terrace of the Belle Etoile Royal Suite were all filmed at Le Meurice Hotel.

The movie shows off the opulence of Hotel Le Meurice, such as glass doors and mirrors adorned with bronze. Le Meurice also has a Palace Hotel designation.

No stranger to celebrity, composer Pyotr Ilyich Tchaikovsky, painter Salvador Dali, Liza Minnelli, Placido Domingo, Ginger Rogers, Yul Brynner, Elizabeth Taylor and Richard Burton have all been guests of the hotel. It is located opposite the Tulileries gardens.

Filming Locations for The Bonfire of Destiny