Travel to Paris to Hear Music

Every day, classical music can be heard in many corners of Paris. Some of these places may even surprise you.

There are the traditional, yet still stunning, venues for classical music in Paris. Theatre des Champs Elysees, presents orchestral, chamber and opera works throughout its season from September through July.

The newly renovated concert hall, Salle Pleyel, has an illustrious history. It owes its construction to a piano maker in 1927 and has hosted such music greats as Stravinsky and Daniel Barenbo?m.

However, a visit to Paris will likely involve encounters with classical music in out-of-the-ordinary places.

- In the Metro. We came across this group performing for the crowds passing through the Metro.

- In the Louvre. The Louvre museum presents series of diverse programming within its auditorium, exhibition rooms, and even under the Louvre pyramid.

- On the Street. Paris is a city that is best enjoyed on foot. In doing so, you may be surprised by musicians on the street such as this: 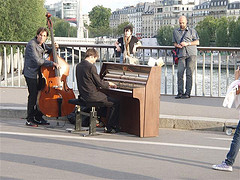 If you enjoy classical music, take an opera and music trip to Paris.