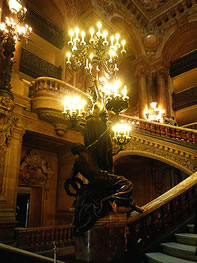 Your La Fille mal gardée Ballet Package begins with a private transfer from the train station or airport to the Intercontinental Le Grand, a prestigious, luxury hotel steps from the Palais Garnier opera house. Throughout the hotel, paintings and theater memorabilia pay tribute to ballet history in the city of Paris.

Your first full day in Paris includes a guided tour of the Palais Garnier, which will give you an in-depth look into the history of this beautiful building and its day-to-day activities. You'll also enjoy a private tour of the city.

The next day, with a guide, venture through the backstage and to the rehearsal rooms of Theatre du Chatelet, where musicals, dance and orchestral concerts are performed.

After a rest and meal of French cuisine at Cafe de la Paix with its a huge winter garden under a glass dome, you'll enjoy a ballet performance at the legendary Palais Garnier opera house.

- Private airport or rail station transfers to your hotel

- 3 nights at the Intercontinental - Le Grand or Hotel Scribe, with daily breakfast and view of the opera house

- First category tickets to the ballet La Fille mal gardée at the Palais Garnier with dining prior to the performance at Caf? de la Paix. Your choice of date between June 18 and July 15, 2012.

- Guided tour of the Palais Garnier and backstage tour of Th??tre du Chatelet