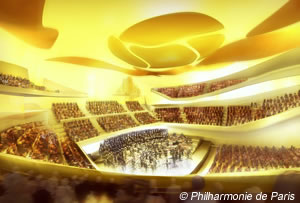 When you think of Paris, its wide boulevards, charming cafes, and ornate buildings erected during Haussman's era likely come to mind. But this week, a new ultramodern concert hall, designed by French architect Jean Nouvel, will be unveiled to the city.

La Philharmonie opens as a new addition for orchestral concerts in Paris. Among some of its innovations, concert goers sitting in the venue's 2,400 seats flow around the musicians like ocean waves, instead of sitting only in front of them. Creators Harold Marshall of New Zealand and Yasuhisa Toyota of Japan also designed the venue to ensure that each member of the audience is no more than 105 feet from the conductor.

Its location in the working class 19th arrondissement, free open days, roof-top public space, and museum-style exhibitions, bring with it the hope of drawing bigger and younger crowds that may be intimidated by the more formal Palais Garnier, which attracts older audiences. It also joins the Conservatoire national sup?rieur de musique et de danse, training ground for young performing artists, as part of the Cite de la Musique complex making it a community center.

Despite its innovation, like the Opera Bastille built before it, it is not without its detractors. The larger venue may mean fewer experimental works meant for smaller audiences are able to be presented. Also, the rush to complete the construction of the concert hall on schedule may evoke fears of less than stellar first performances. Still, orchestra director Bruno Hamard remarks that the venue is a work in progress, 'Even a Stradivarius must be tamed.'