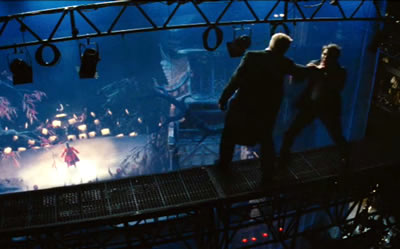 The Vienna State Opera figures prominently in Mission Impossible. Its intricate opera scene, set during a performance of Turandot, was filmed partly at the Vienna State Opera and partly on a London sound stage. The opera house itself comes to life as if it were a real character.

The performance as the backdrop to the scene is a bit of a patchwork of music from the opera. Still, close up shots of the score on a music stand serve as cues for the events in the scene with red ink marking the climactic moment of the opera. With the comedic character and opera buff, Benji, the cool super spy Ethan Hunt (Tom Cruise) and a roster of bad guys, movie audiences get glimpses of real opera singers in the production, the backstage areas with its fly system of rigs, ropes and pulleys to move the sets and curtains, as well as shots inside actual set pieces.

While in the real world, the opera house doesn't take visitors backstage, you can take a 40-minute tour during a trip to the city of Vienna that includes the opera house's foyers, main staircase, Tea Salon, Marble Hall, Gustav Mahler Hall, and the auditorium to see the stage in full house lights. The tour guide provides an in-depth look along the way at the architecture and history of the opera house.

For the full experience of the opera and the history of music in Vienna, take advantage of private tour planning for a personalized trip to Vienna, just for you and your companions, and planned around the dates you choose. You'll get assistance in selecting a hotel, usually among historic properties with a connection to the opera and classical music. Or, you can opt for one of the more contemporary, luxury or art boutique hotels in the Ringstrasse area near the opera house. You'll also have tickets to at least one live performance at the Vienna State Opera.

The other big spy movie of the year, 'Spectre' was shot in the picturesque, mountainous regions of Styria and Tyrol in Austria. In one of the scenes, characters race through S?lden a glacial resort town, south of Insbruck, known for its gondola, ski slopes and Europe's highest road tunnel.

The other prominent shooting location for 'Spectre' in Austra was the gourmet restaurant Ice Q, which opened in December 2013. Audiences will recall that it's a hospital in the movie rather than a restaurant. But the movie respectfully captures its distinctive glass façade, contemporary architecture with jaw-dropping views of the Alps.