Home > Articles >Where to See Stained Glass Windows in Europe

Where to See Stained Glass Windows in Europe

Throughout Europe, the stained glass windows set within cathedral walls tell stories of the Bible and offer a glimpse into the world of the people who made them. What's more, the play of light these windows create is as much a work of art as the windows themselves.

Notable among the stained glass windows in Europe are those at Notre Dame in Paris and Chartes Cathedral, which is about an hour from Paris. Dating from the 12th and 13th centuries, respectively, Notre Dame with its Gothic windows and Chartes with its medieval windows retain much of their original glass.

St. Sulpice Church in Paris, also notable for its windows, is experiencing an up tick in tours and visitors because of the popularity of The Da Vinci Code. But its stained glass windows are reason enough to visit the church. One item to note is that the letters "PS" set in the windows stand for Peter and Sulpice, as opposed to the Priory of Sion as the movie and book suggest.

One feature that makes this art in glass so spectacular is the rose window. Rose windows radiate out generally from an image of Christ. The individual sections of the Rose depict different themes, such as the New Testament in Notre Dame.

In Paris, Sainte-Chapelle's stained glass windows, dating from the 13th century, are hues of deep reds and blues, illustrating Biblical figures. The façade of St. Denis in Paris is a rose window in mauve, purple, and blue.

Rose windows are displayed in other churches in France including St. Clotilde (Paris), Reims Cathedral, and Strasbourg Cathedral.


What's Depicted in the Windows 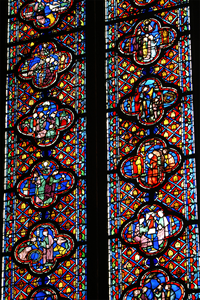 The stained glass windows depict scenes from the life of Christ, the apostles and the Virgin. But there are other subjects.

When you tour the churches in France, England and other locales in Europe, you'll see the Last Judgment, the Zodiac and the Labors of the Month, and scenes of medieval trades, such as those found in the windows of Chartes Cathedral in France.

At Notre Dame, saints and martyrs adorn some of the windows. Its windows also touch on themes of the Old Testament, namely the Descent into Hell with Moses and Aaron as well as Adam and Eve.

In London, Southwark Cathedral displays scenes from Shakespeare's plays, while Canterbury Cathedral in London depicts Adam digging with a spade.

Planning a trip to Europe? Reserve a Guided Tour of Notre Dame and other sights in Paris. If you're visiting London, the V&A Museum has a wonderful collection of European stained glass windows. Private Tours of the museum and sights throughout London are available.