Good stereotypes are hard to shake. Travel books and movies seem only to reinforce an image of Italians as warm, kind-hearted, welcoming. But even as travelers may seek to form a more realistic view of Italy, actual events can’t help but wonderfully confirm our preconceived notions.

One man in particular stands out. He was a pensioner sitting at the station with his friend, waiting to see who would come off the train. I suspect it was something he did on most days.

He greeted me immediately, as I got off the train. He jumped off his bench and offered to buy me a cup of coffee. I was flattered, but had to decline. I told him I was on my way to the Basilica.  He waved his hand in an unmistakable “Follow me” motion.

I followed him to his car and we got in. During the short drive up the hill to the old town, we chatted about the cost of traveling to Italy from the US and about the tourists who flock to Assisi.

When we arrived at the gate of the old town, I tried to hand him a wad of Euros. He refused. He was the perfect kind-hearted, generous Italian. And I was lucky to have been welcomed to Assisi by him.

Assisi, named after the saint of the same name, sees scores of day-trippers streaming in from Rome and Florence. Still, it retains a serene atmosphere that reflects the character of the people who live there - kind and welcoming. Un-pushy shopkeepers run the stores that are filled with much-needed, well, much-wanted wares, such as religious items, specialty papers, gelato. 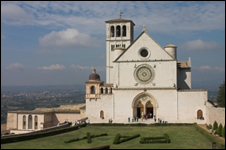 But Assisi's claim to fame, of course, is the Basilica di San Francesco (also called Basilica of St. Francis). On the edge of the town, it rises up from the path leading to it. It’s a spectacular vision whose only competition for attention is the sky and the clouds. Spend time in the upper church to take in the frescoes, many of which were created by Giotto.

Next you can see remnants of the town's Roman heritage. The Temple of Minerva, like many Roman temples, now serves as a foundation and its columns as the facade for a Christian church. The temple, built in the 1st century BC, was believed to have been dedicated to the goddess. However, later digs revealed that the Romans probably built it to honor Hercules. Despite its age, the façade, with its fluted columns and corinthian capitals, remains surprisingly intact.

If you decide to go, you’ll want to take the train to Assisi, which is in the region of Umbria. The train trip from Florence is a two and a half hour ride. But it offers nice scenery as it cuts through the countryside. Once you arrive, you take the bus up the hill to the old town.