Home > Articles >How to Travel by Train in Europe

How to Travel by Train in Europe 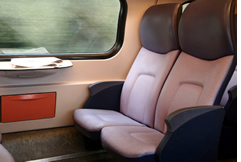 Riding a train in Europe is a travel experience unlike any other. You see the countryside from a vantage point not possible by plane or car. You have the convenience of frequent trains with a comfortable ride.

What’s more, European trains help eliminate travel hassles. You go directly to and from the heart of the city without having to navigate through crowded airports, deal with traffic, decipher foreign road signs or guess at driving rules. It’s carefree travel.

Is a rail pass worth the cost? Well, it depends. If you plan to take many train trips over an extended period of time and through multiple countries, then a pass may be worth it. However, when using a pass, you will have to make reservations for high-speed and night trains, which are charged extra fees for each trip you take. That's why, for most travelers, buying point-to-point tickets is often the simplest option.

Eurostar runs service between Paris Gare du Nord station and London St. Pancras station through the Channel Tunnel. The Eurostar train gets you from these two cities in a stunning 2 hours 15 minutes. Eurostar also operates service to Belgium and other cities in the UK and France.

If you’re only going one way, it’s cheaper to buy a round-trip (return) ticket and only use the outward portion of it. For instance, if a round trip fare is $205; the one-way fare could be as low as $157. When choosing your return journey, pick a day in the middle of the week when fares are the lowest.

Trenitalia serves all of Italy. For the least expensive option, purchase tickets in Italy at the train station. You can avoid the lines at the ticket counter by using the self-service machines that offer options in English.

The TGV network of high-speed trains, operated by SCNF, will get you to almost any destination in France.

The Thalys line serves Belgium, France, the Netherlands and Germany to the cities of Brussels, Paris, Cologne, Düsseldorf and Amsterdam and points in between.

The InterCityExpress or ICE connects all the major cities of Germany such as Hamburg, Munich, Berlin, Frankfurt, Stuttgart and Cologne.

Tips on Riding the Train in Europe

To avoid any confusion and hassle at the station, check timetables and consider buying train tickets before you depart for Europe.

When you arrive at the station, frequently check the boards to find your train number and platform, which may change at the last minute.  Only the final destination for your particular train may be displayed on the board. However, printed timetables posted throughout the stations will show every stop on a particular route.

Before boarding, in Italy, you will need to validate your ticket by getting it stamped at the small machines at the front of each platform. You will also have to show your validated ticket on the train to the conductor. Outside of Italy, it is not always necessary to stamp your ticket before you get on board. But your ticket will be checked at least once during your journey.

It’s always a good idea to carry a printed copy of the timetable with all of the stops for your train. The information desk of the train station will have a timetable for your route. This way you’ll know when you should be arriving at your destination and after which stop.

When you’re on the train, announcements will be made of the stops over the speaker. But be aware that the names of the stops may be pronounced differently than what you might expect if you don't speak the language. Each platform displays large signs that show you the name of the station. They’re easy to spot from thetrain window.

Most stops will be brief. As you approach your destination, grab your bags and stand by the door. When you’re planning your trip, try to pick routes that have minimal connections. A change of trains can involve going through a tunnel, walking the length of a station and schlepping your bags up stairs to a different platform. If possible, taking a train with no changes will help reduce the hassle, which leads to our last tip for train travelers - pack light.

5 Ideas for an Unforgettable Trip to Europe

How to Travel Europe Without Tours