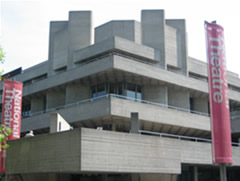 Opened in 1976, the National Theatre comprises three separate stages on the south bank of the Thames: the Olivier Theatre, the Lyttelton Theatre and the Cottesloe Theatre.

The Olivier Theatre, named after Sir Laurence Olivier, the theatre's first artistic director, is the largest auditorium. It seats 1,160 people. The Lyttleton Theatre has an adjustable proscenium arch design, which can be configured into an open-end stage, accommodate a forestage, or allow for an orchestra pit. The Cottesloe Theatre is the smallest and most versatile of the spaces. In fact, the configuration of the Cottesloe’s performance space and seating area is different for almost every production.

The National Theatre is much more than a group of buildings. The resident company presents an eclectic repertory of Shakespeare plays and other classics as well as new and experimental works by contemporary playwrights.