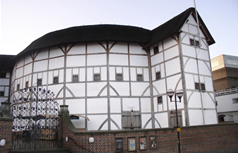 The Globe Theatre that stands today in London is a reconstruction of the playhouse, built in 1599, for which Shakespeare wrote and presented his plays. The current Globe Theatre, which hosts about 200,000 tourists per year, is the inspiration of Sam Wannamaker, the American actor who drove the research, funding and construction.

Though no blueprints of the original theater in London survived, the archaeological excavations of the Globe and Rose theaters, maps, contracts, accounts of people who went to the playhouse, and the plays themselves were used to reconstruct the theater. The foundation of the original Globe was discovered in 1989 in London, about 200 yards from the current theater.

The Globe, which can hold 1500 people, is an open-air theater with galleries stacked on top of each other. It has a yard where people stand as they did during Shakespeare's day. When it rains, a roof protects the people seated in the galleries and the actors on the stage. Those who stand in the yard, however, can expect to get wet.

The Globe Theatre's season plays runs from May to October in London. Guided Tours of the Globe Theatre are given daily. There is also an exhibit of costumes, props and historical information.