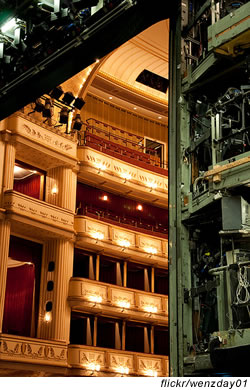 For some of us, the excitement of seeing a performance at an opera house is just not enough. Fortunately, theaters in cities such as Paris, London and Vienna open their backstage doors to the public. Take advantage of these unique opportunities to look behind the scenes of some of the world's grandest theaters on special guided tours and witness, first hand, some of the work that goes into a production.

A backstage tour may include a discussion of the theater's history, a rare glimpse of a ballet company in class or designers creating sets. Keep in mind that tours may change if there's a performance on that day. And because they are working theaters, entrance to the main opera house auditorium is not always guaranteed.

While it's possible to walk around the public areas of the historic and opulent Paris opera house on your own, guided tours of the Palais Garnier are also offered and are led by an English-speaking guide. During the 90-minute visit, you'll learn about the theater's history, its architecture and the daily activities of the artists. In this theater made famous by its illustrious past and the musical The Phantom of the Opera, you will also have the opportunity to visit the grand staircase, the foyers, and the balcony box seats, and get close to the stage if a rehearsal is not scheduled.

The guided tour of Teatro alla Scala (La Scala) provides an in-depth view into the history of the theater and the activities that occur within it as your guide takes you through the auditorium, the theater boxes, foyer, the pit orchestra and onto the stage itself. The La Scala museum with its displays of costumes, instruments and more is also included.

One of the most comprehensive of the theater tours, the guide at the Royal Opera House in London takes you through sections of the auditorium, backstage to the prop room where workers build the sets, the costume shop and the ballet studios. There's a chance you will even catch the ballet dancers backstage in rehearsal in their massive ballet studio. Guided backstage tours last approximately 1 hour 30 minutes. Book tickets at the box office.

The Vienna State Opera house (Wiener Staatsoper) offers international audiences opera performances, ballet and concerts throughout the year. It opened in 1869 and later reopened in 1955 after the Second World War. Notable music greats such as Gustav Mahler, Richard Strauss, Clemens Krauss, Karl B?hm, and Lorin Maazel have all made their mark on the legendary theater The guided tours, which last 40 minutes, may be combined with admission to the theater museum.

Teatro la Fenice in Venice offers a couple of options for visitors. A self-guided tour of the beautiful halls and grounds with audioguide is available at the box office. Guided tours are also available with an expert that will explain the architecture and history of the opera house from its origins through its rebuilding.

The new sprawling performing arts center was built in the Parc de la Villette in the 19th arrondissement of Paris to provide easy exploration and access to classical music for everyone. During your visit, a guide will take you through Musée de la Musique, the museum displaying historical instruments, and on to the backstage and rehearsal studios as well as the breathtaking Grande Salle, which seats 2,400 people.

See also: Opera Tours to Vienna, Paris, Milan, and other cities that include hotels, backstage tours, transportation and more.

The Phantom's Underground Lake and other Mysteries of the Paris Opera