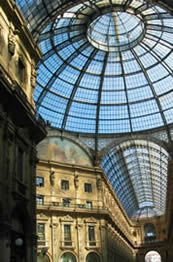 The stunning Galleria Vittorio Emanuele II is a covered passageway connecting two of Milan's important landmarks: the Duomo and Teatro alla Scala (La Scala) opera house. The galleria was built between 1865 and 1877 to honor Vittorio Emanuele II, the first king of Italy united after the nationalist revolution.

Representing the union of church and state, the galleria forms a cross of two glass-vaulted and cast iron roof arcades that come together at an octagon. It links Piazza della Scala, symbolizing the secular, to the Piazza della Duomo, representing the spiritual. It also features mosaics with images of a united Italy and paintings representing various countries and disciplines from science to art.

Today, elegant shops (Prada, Gucci, and Louis Vuitton, to name a few) restaurants and caf?s (such as the historic Savini) fill this 19th century mall of iron and glass. And we have the architect of the Galleria Vittorio Emanuele II, Giuseppe Mengoni, to thank for introducing this concept of the indoor shopping mall. His Galleria in Milan served as inspiration for the Burlington Arcade in London, and later for Saint-Hubert Gallery in Brussels.

Visitors to Milan can visit the Duomo, Galleria, La Scala, and the Last Supper in a half-day visit, since they are close to each other. The majestic, gothic Duomo with its marble fa?ade and soaring 19th century spires can be combined with a tour of the historic La Scala as well as the Last Supper.


Planning a visit to Milan, Italy? Book a Guided Tour of Milan's attractions, which includes tours of Galleria Vittoria Emanuele II, La Scala, the Duomo and the Last Supper.