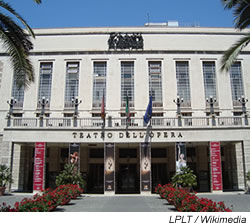 One of the three venues in Rome for the Teatro dell'Opera, Teatro Costanzi, which opened in 1880, is celebrated for its historical significance.

Today, Teatro dell'Opera has a resident orchestra, a ballet company, chorus, as well as a staff of set designers and costume makers. Teatro Costanzi, seating more than 1600 people, has three tiers of boxes, two balconies and a Bohemian crystal chandelier, which is more than 19 feet in diameter, weighs almost six tons and has 262 lamps.