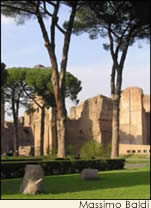 Since 1937, the summer opera season of the Teatro dell'Opera in Rome has been held at the ruins of the Baths of Caracalla (Terme di Caracalla). Built between 212 and 216 AD for the Emperor Antoninus Caracalla, the baths, or spas, provided the public with a place to relax, exercise and socialize.

The complex could accommodate more than 2000 people. And it’s no wonder, because the complex is larger than two football fields. The central section of the complex contained two gymnasiums as well as three rooms, each with a large pool for cold, warm or hot water.

Surrounding the main building were open spaces for track and field events and the gardens. Other buildings contained shops, restaurants, meeting halls, and even a public library. You can still see parts of the floors covered with the same mosaic tiles that existed during ancient times.