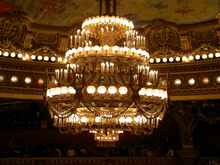 When you walk into the opera house in Paris, the Palais Garnier, you'll be instantly struck by its opulence — the staircase, the sculptures, the chandelier weighing over six tons. More than a theater, the Paris Opera is a palace.

As for the history of the Paris Opera, it was was built by architect Charles Garnier who, at only 35, won a contest to design it. Once construction began in 1862 in Paris, the work was interrupted by a number of events, including the Franco-Prussian War, the fall of the Empire, the Paris Commune and the need to pump water from the marshy land on which the building would stand. This marsh would be immortalized in the musical The Phantom of the Opera as the "lake" where the Phantom lives.

The Palais Garnier has seating for 2,200 people and a stage large enough to accommodate 450 performing artists. There is a grand ballroom and a small museum. Built in the neo-baroque style, the opera house is richly decorated with friezes, columns, velvet, gold leaf, nymphs, cherubs and a ceiling painting by Chagall from which the massive chandelier hangs.

Guided Tours of the Palais Garnier »

What to Wear to the Opera:
Cocktail Attire to Dressy Casual - The Palais Garnier, with its ornate interior and illustrious history, is a place where you want to dress up. However, formal gowns and tuxedos are not necessary, unless it's an opening night gala. At other times, you'll find people in tailored shirts, sport coats, ties, dress slacks, and cocktail dresses. Those in jeans, t-shirts or sandals will feel out of place.