Home > Articles >Where to Go in Europe for the Holiday Season

Where to Go in Europe for the Holiday Season

Visiting Europe during the winter season offers everything from natural wonders to the true feeling of Christmas past, with Christmas markets dating from the 15th century, entire cities decorated with lights, and holiday concerts in historic churches. Below, we list some of our suggestions for the best places in Europe to experience the wonders of the winter travel season.

Paris is a sight to behold during the holidays. The Champs Elysees is aglow with spectacular lights and store windows are decked out with festive decorations. Music lovers will find much to enjoy from mass at Notre-Dame-de-Paris, Montmartre's Sacré-Coeur and Eglise de la Madeleine or ballet at the Palais Garnier opera house.

Stay at the recently reopened, luxury Hôtel Plaza Athénée. It's interior courtyard, La Cour Jardin, is transformed in the winter into an ice skating rink, complete with decorations and holiday lights.

One of Europe's oldest Christmas markets, the Christkindlmarkt at Rathausplatz (city hall) is held from November through December in Vienna. Here, you can sample gingerbread, hot spiced wine and shop at more than 100 stalls selling handmade, wood-carved toys and ornaments. Schoenbrunn Palace, the summer residence of the Habsburg monarchs, also holds a festive Christmas Market.

Attend a concert or opera at the Vienna Opera House, on the majestic Ringstrasse or choose among dozens of holiday season concerts throughout the city. And if you stay through New Year's Eve, there's the Imperial Ball held at the Hofburg Palace, which kicks off the season of formal balls throughout the city. 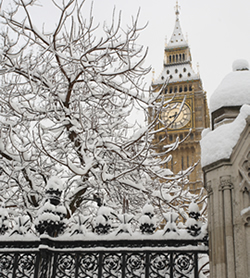 Like other major destinations in Europe, London lights up its popular sights for the holidays in the West End, on Regent Street and Trafalgar Square.

Also, holiday concerts are held at St Paul's Cathedral and Westminster Abbey and you can catch a performance of the Christmas Carol Sing-Along at Royal Albert Hall. The English National Ballet presents its annual Nutcracker at the London Coliseum while the Royal Ballet often presents its verson in some years at the Royal Opera House at Covent Garden.

Take a ride on the London Eye in a special capsule transformed into an ice cave. It includes a guided tour tying landmarks to stories of winter and the holidays in London.

Experience the phenomenon of the Northern Lights during the winter. Aurora Sky Station in Swedish Lapland, accessible by a chair lift, serves as one of the best viewing spots. Also, stay a night or two, if you like the cold, at the stunning ICEHOTEL the rooms of which are constructed entirely of ice and snow featuring works by artists from around the world.

Why Visit Europe in the Winter