Gelato, which means 'frozen' in Italian has a flavor and texture that is distinctly different from ice cream. Gelato is the much heralded dessert of Italy, which almost every traveler who has ever been to Italy swears by.

The Difference Between Ice Cream and Gelato

In making ice cream, it all begins with milk, cream, sugar, and eggs. Air is whipped in as this mixture is churned and cooled.

Gelato starts out in a similar way but is churned slower, so less air is mixed in, resulting in a more dense product with highly-concentrated flavors.

Gelato has fewer eggs and less cream than ice cream, further allowing more intense flavor to pop. And there are some interesting flavors. You'll always find the classic chocolate (Cioccolato) and fruity options. But you'll also find one-of-kind flavors, such as rose water or whisky, and some exotic combinations.

Also, gelato is frozen and stored at warmer temperatures, preventing it from freezing solid. The higher temperature means that the gelato stays silkier and softer. It also doesn't last as long in storage.

In the United States, because of health regulations, ice cream must contain a certain amount of milk fat and can't have more than a certain percentage of egg-yolk. This is why it's so hard to find real gelato in the United States. Even in Italy, substitutes are beginning to crop up.

How to Spot Real Gelato in Italy

After hearing so many glowing reviews, it can be disappointing to take your first taste of gelato only to find it icy and crumbly, (not creamy), or boring and bland, (not bursting with flavor). Not all gelaterias serve authentic gelato, in all its silky, smooth goodness. 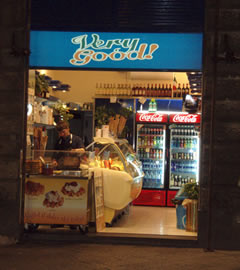 Because high-quality gelato can only be stored for a few days, gelaterias typically make their own gelato onsite. This is a time-consuming and labor intensive process. So, in the interest of cost and time, some shops in Italy are beginning to sell industrial, mass-produced gelato instead of making it in the shop using traditional methods. What you end up with are differences in quality from shop to shop.

Still, real, artisan gelato can be easy to spot. You'll notice gelato bulging out of its container with a silky, shiny texture. Ice cream, on the other hand, will look chunkier, with ice crystals, harder and more like a solid block in the container. However, also be aware of gelato that's bulging too high from its container.

Gelato flavors are often very unique to the individual shop. Each shop should offer creative, one-of-a-kind flavors. That's part of the fun. Be wary if you see identical flavor names across many different shops.

Planning a trip to Rome or Florence? Have us design the trip of your dreams.