Home > Articles >6 Ways to Have a Magical Experience in Rome

Vacations are always too short. And too often we have to whiz through the top attractions to squeeze in all the sightseeing wonders we want to see. But a slow pace, fewer sights, and a lot of aimless wandering can still provide an experience of Rome that surpasses expectations.

Think of this as a list of experiences that if done in slow, leisurely chunks, will stick out in your memory as the best moments, even highlights of your trip. Some are self-guided walks, others tours or events. While it's true that magical vacation moments often come as unexpected events that just happen, use this as a way to increase the odds of one of these moments happening to you. 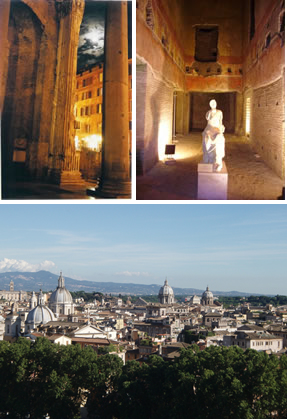 Bernini's angel statues on Ponte Sant'Angelo, ancient ruins and Renaissance fountains peppered throughout the city are beautifully lit up at night. In fact, the entire city glows with a warm light once the sun goes down. The best way to take it all in is to walk through the city, to the fountains and piazzas as well as along the Tiber River. A good time to do so is after dinner. You'll likely find yourself in the company of local Romans taking their passegiata, or evening stroll.

2. Hear singing in the Pantheon.

The Pantheon was first built in 27 B.C. as a temple to the Roman gods. The Emperor Hadrian rebuilt it in the second century A.D. By the seventh century, it was a Christian church. The sunlight that shoots through the almost 30-foot opening in the Pantheon's ceiling is all that illuminates this marvel of ancient Rome. And then there's the music. When the choir sings, the harmonies resonate off the walls and the building swells with delicious sound. You need not be Catholic to enjoy it. Mass is held in the evening, but you can often catch a group performing at other times of the day.

3. See an opera or ballet in the open air at Terme di Caracalla.

With the grandeur of the ruins as a backdrop, opera is performed at the Baths of Caracalla as part of the Teatro dell'Opera summer season. Performances begin after the sun goes down and the stars appear. In addition to opera, the company also presents ballet performances, such as productions of Swan Lake or works featuring principal guest artists led by Roberto Bolle. The season runs each year from late June or early July to August.

Baroque art, visitors and locals converge at Bernini's Fontana dei Quattro Fiumi (Fountain of the Four Rivers), the centerpiece of Piazza Navona, a square in Rome flanked by Fontana di Nettuno (Neptune fountain) on one end and the Fontana del Moro (Moor fountain) on the other. The piazza is always buzzing with activity. Shop (or haggle) for artwork from a street vendor at the market. It really starts hopping at night after the dinner hours. Drink some limoncello in a café as you people watch. Or, better yet, eat gelato as you stroll through the piazza.

The Emperor Nero built the Domus Aurea in 64 A.D. After his death, Nero's successors tried to erase his memory by stripping the structure of its marble and burying every possible trace of this decadent palace under earth and buildings. Today, the excavated rooms with their fresco-covered walls are vast and amazingly intact, thanks to having been underground for centuries and thus protected from the elements and invaders. The sight was closed for years after a collapse. However, it reopened for visitors to view the renovation work. Booking in advance is strongly encouraged as the only way to see it is by guided tour. The Domus Aurea is located right across the street from the Colosseum.

5. View the city from atop Gianicolo Hill (Janiculum) in Trastevere

Take a taxi (or walk from a reasonably close bus stop) to the top of Janiculum near Trastevere. Janiculum, so named for the deity Janus, offers stunning, 360-degree views of the entire city. This hill, with its quiet park, is cooler than the city center, making it the perfect spot for a picnic or a special moment with a loved one.

6. Explore the Roman Forum at sunset.

First, roam the ancient Forum on one of many entertaining tours that recount colorful stories of ancient Rome's most notable figures while guiding you through the ruins. Then, stick around until sunset. If you stand near the main entrance looking into the forum, you'll witness red, orange, and purple light shining through the forum, creating a view that is probably much the same as the one that the ancient Romans saw thousands of years ago. It's magical.

If you find that you don't have time for all the things you set out to do in Rome, then toss a coin in Trevi Fountain. You'll just have to plan on coming back.

Planning a trip to Rome? Get planning help and advice for trips to Italy.

How to Buy Opera Tickets in Rome