Leonardo da Vinci was born in 1452 in the town of Vinci, Tuscany about 35 kilometers west of Florence. His childhood home, a farmhouse called La Casa Natale di Leonardo, 3 kilometers from Vinci in Anchiano, recently reopened to the public after an extensive restoration.

In addition to exploring Leonardo da Vinci's home, travelers to Tuscany can visit Museo Leonardiano, the Museum of Leonardo da Vinci, which is dedicated to the works of the artist and inventor.

On display are drawings, frescoes, models of his inventions, a well as high-definition, digital reproductions of his famous paintings such as The Last Supper and The Battle of Anghiari. There is also a life-size hologram of Leonardo recounting his past and explaining his work.

Leonardo da Vinci spent his final years in Amboise in the Loire Valley region of France. Here, King Francis I of France, who admired Leonardo da Vinci's talent, provided the genius with an expansive manor, called Le Clos Lucé, in which to live and work.

Visitors can walk through the rooms of Le Clos Lucé to see reproductions of the original furniture, tapestries and domestic artifacts, bringing to life da Vinci's time and culture. 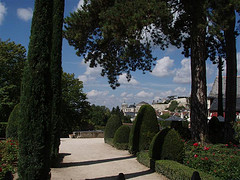 Replicas of his inventions, some of which may be touched and manipulated, are also on display.

Beyond the home is a huge garden displaying further Leonardo da Vinci inventions, such as his two-level bridge.

Le Clos Lucé can be easily reached on foot or bike from the center of Amboise.