Journey to Bavaria for an encounter with locales that seem plucked from your favorite childhood storybooks, such as castles nested in the Alps, charming medieval towns, pastoral landscapes along the Rhine River Valley.

Starting in Munich, the Bavarian capital and hub for exploring the region, you can enjoy the rich history of the Residenz palace and the Marienplatz district; the 15th century Gothic Frauenkirche; the 200-year-old outdoor market, and luxury shopping at the F?nf H?fe. Then, venture beyond Munich into the land of the Bavarian kings. 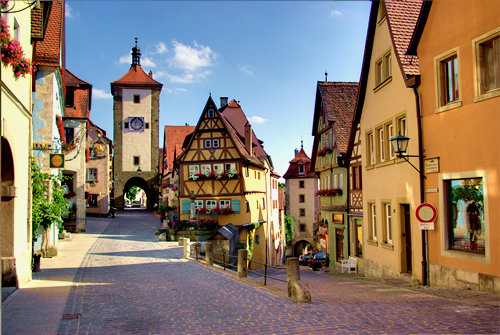 - Get a feel for the time of the Middle Ages in Rothenburg ob der Tauber with half-timbered houses and arched gateways left intact since the 17th century.

- Walk atop the wall that encircles the old city center of Dinkelsb?hl where 16 fortified towers and the original city gates greet visitors.

- Experience a beautiful town of the Alps, Mittenwald with its decorated houses, painted facades and ornately carved gables known for the stringed instruments made here.

- Take in views of Lake Constance on the garden island of Lindau, the 9th century town of the Roman Empire surrounded turquoise waters. Perfect for bike rides.

- Step into more than 150 Rococo churches of the 18th century in Pfaffenwinkel by the lake as well as the famous pilgrimage church, the Wieskirche, a World Heritage site.

Make F?ssen or the village of Hohenschwangau, south of Munich, your base to visit the fairytale castles of Neuschwanstein and Hohenschwangau.

- Taste Riesling wines in the vineyards after visiting the Residence Palace, a World Heritage site in Wurzburg, known, among other things, for its staircase, topped by an unsupported vault, and the ceiling fresco by Venetian Giovanni Battista Tiepolo.

- Experience the Imperial Castle of Nuremberg dating from the Roman empire and the old market square which features the annual Christmas market.

- See the palace in Bamberg, which has over 40 state rooms featuring 17th and 18th century furniture and tapestries and the emperors captured in life-sized portraits.

- Wander through the complex of Coburg fortress, which once hosted the reformer Luther, to admire the art and treasure museum collections.

- Listen to the music of Wagner in Bayreuth famous for its annual Richard Wagner Festival as well as the New and Old Palaces.