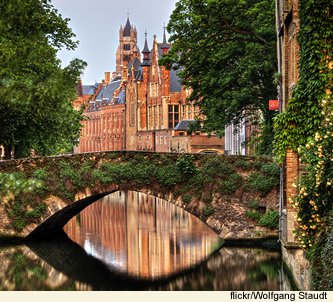 Because it was a forgotten city, Bruges today looks as if it were plucked intact right out of the Middle Ages. It is also why UNESCO designated this Medieval charmer as a World Heritage site.

Bruges is just lovely. The lack of car traffic in the city center adds to its allure. It's a town for walking.  In the morning, you can walk along the winding cobblestone streets and romantic canals with only the sound of church bells and foot steps.


Begin your day at the central Markt square, where the climb to the top of the 13th-century belfry will reward you with spectacular views. Once you return to the bottom, you can have another reward - authentic Belgian french fries (frites) from one of two stands at the entrance.

Near the Markt at Burg square, visit the Basilica of the Holy Blood with its Romanesque chapel for a view of art and religious relics.

Later, get away from the action of the town's center by heading down the path along quiet streets and charming shops to the Begijnhof. The Begijnhof is a group of buildings surrounding a courtyard. It served as a refuge for widows.  The equally tranquil Minnewater, known as the Lake of Love, is nearby.

Don't let the Medieval sights fool you. Bruges has all of the sophistication and contemporary culture of a big city.  The Bruges government and its people place great importance on culture, investing heavily in its arts institutions and museums, of which there are many all within walking distance from the historic center.

The Memling Museum in St. John’s Hospital (Sint-Jan - Hospital Museum), one of the oldest preserved hospital buildings in Europe, displays works by the Flemish painter Hans Memling. And the Gruutehusemuseum housed in the 15th century Gothic mansion of Flemish nobleman Lodewijk Van Gruuthuse, showcases a stunning array of artifacts, everything from musical instruments to kitchenware and tapestries.

Oh, and there's Chocolate. Lots of it.

Bruges is home to at least 50 chocolate shops. Most notable among them is Dumon and The Chocolate Line, which serves up creative mixes such as peas and wasabi covered in chocolate.

Chocolate lovers will also appreciate the Choco-Story Chocolate Museum, which chronicles the history of chocolate beginning in 600 BC and ends with a demonstration of workers making chocolates for museum goers to enjoy.

By train, Bruges is 2 hours 22 min from Paris, 1 hour from Amsterdam, and 1 hour from Brussels.

How to Travel by Train in Europe