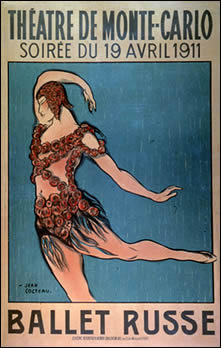 Ballet companies around the world will celebrate the 100th anniversary of the Ballets Russes with special performances, lectures and exhibits.

Sergei Diaghilev created the Ballets Russes in 1909 and directed it until his death in 1929. The company sparked renewed excitement for the art of ballet, which had been in a period of decline.

Among the companies presenting Ballets Russes programs this year, Boston Ballet will hold a multi-day festival. Germany's Hamburg Ballet and The Dutch National Ballet in Amsterdam both have festivals planned. Also, Teatro dell'Opera in Rome, the Paris Opera Ballet and the Royal Ballet in London will present special programs honoring the legacy of the Ballet Russes.

Another ballet that shocked audiences at its premiere was Nijinsky's L'Apres-midi d'un Faune (Afternoon of a Faun). In this ballet, dancers appear as a tableau, reminiscent of a painting on an ancient Greek vase. The ballet will be presented by the Paris Opera Ballet this year.

In Rome, the Teatro dell'Opera will present Fokine's Le Spectre de la Rose, which is the story of a debutante who dreams that she is dancing with the rose that she has been holding in her hand.

Many of the Ballets Russes dancers of the original company were trained at the Imperial Ballet School in St. Petersburg. Dancers that joined later trained in Paris. The ballet company toured in Europe, at times calling the Théâtre Mogador and the Théâtre du Châtelet in Paris home, and at other times touring the US.

Where to Take a Ballet Class in Paris