Home > Articles >Paris Sightseeing with Opera as Your Travel Guide

Paris Sightseeing with Opera as Your Travel Guide

Paris, with its sights, sounds and people, stands out as a character itself in operas such as La Bohème and Manon. It's a place where composers and librettists found their inspiration and is home to one of the world's most beloved opera companies, L'Opera National de Paris.

During your trip to Paris, experience in real living color some of the Paris neighborhoods, streets, and indoor places that feature as settings in many beloved operas.

Puccini put the action of La Bohème in the middle of 1830s Latin Quarter, where four young friends struggle to realize their dreams.

The real Latin Quarter, was once the haunt of artists such as Sigmund Freud, Hemingway, Picasso, and Jim Morrison. Though the Latin Quarter is no longer synonymous with struggling bohemians, it's more touristy now. The Sorbonne University and throngs of bookstores help it retain some of the scrappy charm that's reflected in the opera La Bohème.

Walk along the Latin Quarter's streets to visit the Pantheon and the beautiful church Ste. Etienne du Mont, housing the tomb of St Genevieve, the patron saint of Paris. Les bouquinistes, the book poster vendors line the banks of the Seine in the Latin Quarter. 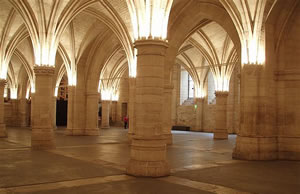 For some historic sightseing, you can visit the cells of La Conciergerie where Marie Antoinette was held prisoner before being led to the guillotine. La Conciergerie shows a video highlighting the history of the prison and its most famous prisoners. The Cluny Musée National du Moyen Âge, also in the Latin Quarter, houses treasures of the Middle Ages.

At a gathering on the Cours la Reine, Manon, in Massenet's opera of the same name, learns that her lover plans to enter the seminary.

The Cours la Reine, commissioned by Marie de Medici in 1616, is the first avenue to be built through the area west of the Tuileries Gardens. During the period in which Manon is set, the Cours la Reine was reserved only for the court. You can imagine the stately promenades of refined men and women in sumptuous finery.

The expansive Tuileries Garden (Jardin des Tuileries) connects to the Cours la Reine, creating a tree-lined esplanade leading all the way to the Louvre. Here you can enjoy the statuary throughout the garden. Or simply relax under the trees to people watch.

Another scene of Massenet's Manon takes place at the church of Saint Sulpice (Église Saint Sulpice) in the 6th arrondisement where Manon convinces her love to run away with her.

The actual church of St. Sulpice has one of the world's largest organs with 6,700 pipes. Free concerts are held here. The Delacroix frescoes housed in the Chapelle des Anges draw visitors to Église Saint Sulpice as well.

Also, fans of The Da Vinci Code will note that the Opus Dei monk in the story goes to St. Sulpice church to follow the Rose Line, or meridian marker, in search of the Holy Grail. Thus, the church is a popular stop on the Da Vinci Code tour.

The Montmartre of 19th-century Paris is as much a character in the opera Louise by Charpentier as Louise herself. Louise, despite feeling obligated to her working class parents, runs away with her lover. She relishes her life in the Montmartre and is even crowned the Queen of Bohemia and the Muse of Montmartre by her friends. 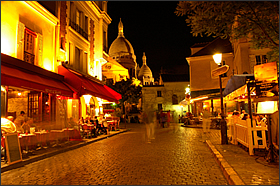 The real Montmartre is a charming area of Paris that seems wonderfully suspended in time with winding cobblestone streets and outdoor cafes. The great artists, Renoir, Monet, Degas and Van Gogh, whose house you can see, all lived or worked here.

A tour of Montmartre on your own or with a guide can begin with a funicular ride to the top of Montmartre Hill and Sacre Coeur Basilica offers breathtaking views of Paris. Follow the streets through the Place du Tertre to buy paintings. Then visit Au Lapin Agile, a former cabaret and later a place where the masters of modern art met in the early 1900s.

"I'm Off to Chez Maxim," proclaims Count Danilo in the opera The Merry Widow (Die Lustige Witwe) by Franz Lehar. Lehar used Chez Maxim as a setting for his opera in which Danilo escapes to the historic restaurant to forget his troubles.

Chez Maxim opened during the La Belle Époque, in 1893 on Rue Royale. It still exists today. The restaurant is a monument to Art Nouveau characterized by rich color, curved lines, and floral motifs. It's worth a visit if only to see the Art Nouveau décor, furniture, china, and glassware on display.

In the opera Andrea Chénier by Giordano, the protagonist Chénier is brought before the Revolutionary Tribunal and eventually sentenced to death at Saint Lazare Prison.

Originally a leper hospital founded in the 12th century, Saint Lazare Prison became the St. Vincent de Paul hospital in 1632. The building was converted to a prison during the Reign of Terror of 1793 when about 40,000 people were sent to their end. In fact, the real André Chénier, a French poet, was guillotined here during the Revolution.

Planning to visit Paris? Inquire about our opera packages.

Filming Locations for The Bonfire of Destiny

Paris After Dark: Things to Do at Night in Paris