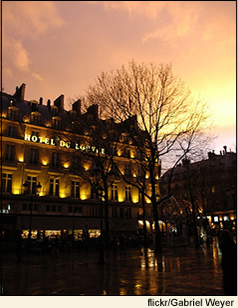 To experience the history of Europe, consider staying in a landmark hotel. The historic hotels listed below provide the ultimate in luxury, service and high-tech comforts and have been completely restored to above and beyond their original glory. They can claim a prominent place in history not only because of the distinguished guests who stayed there but because they are each special in their own right. Simply visiting one is an experience in itself.

Called an "extension to Buckingham Palace" because of its long reputation of hosting royal guests, Claridge's is a luxury hotel in London founded in 1812.

The parade of dignitaries to the hotel began with the Great Exhibition of 1851 when the Grand Duke Alexander of Russia and King William III of the Netherlands stayed there. Ten years later Empress Eugenie of the French would entertain Queen Victoria at the hotel.

During the World Wars, aristocrats, who were forced to sell their London homes, and royal families in exile used the hotel as a residence. In fact, Peter II of Yugoslavia and his wife spent much of World War II at Claridge's. For a day, on June 17, 1945, Sir Winston Churchill declared suite 212 Yugoslav territory and is purported to have had a spade of Yugoslav dirt placed under the bed so that the heir to the throne could be born on Yugoslav soil.

London's Cadogan Hotel, built in 1887, is located on Sloane Street, near the entertainment district of the West End. The hotel reopens in 2016 after its extensive renovation.

Some of the events that happened at Cadogan could be considered the stuff of celebrity gossip of its day. England's future King Edward VII, frequently visited The Cadogan to see with his mistress, the famous British actress. Lillie Langtry, who lived here in the late 1800s.

The London hotel is also infamously known as the place where Oscar Wilde on April 6, 1895 was arrested, in room 118, on charges of indecency. The event is retold in John Betjeman's poem The Arrest of Oscar Wilde at the Cadogan Hotel. Wilde served two years in jail.

On the Champs-Élysées at the north end of Place de la Concorde, the Hôtel de Crillon comprises one of two buildings separated by the rue Royale. King Louis XV commissioned the construction of the buildings in 1758. One of the buildings still serves as headquarters of the French Navy (La Royale). The other is the Hotel de Crillon.

The famous composer Leonard Bernstein frequently stayed in a Hôtel de Crillon hotel suite that was eventually named after him and still retains one of his pianos.

Hôtel de Crillon will complete its renovation and reopen in 2015.

Founded in 1855, the Hotel du Louvre faces four directions with views of the Louvre Museum, the Opera Garnier, the Comédie Française and the Place du Palais Royal. Its guests solidified the hotel’s prominent place in history.

In the late 1800s, the impressionist Camille Pissarro found inspiration for his paintings of Paris, including one of the opera house, while looking out of the windows from his room. Guests today can stay in his room called the Pissarro Suite.

Arthur Conan Doyle featured the Hotel du Louvre in his Sherlock Holmes stories. And in 1910, Sigmund Freud frequented the hotel while writing Un Souvenir d'Enfance de Léonard de Vinci, which covers the childhood of Leonardo whose famous painting is displayed in the Louvre Museum.

Built in 1863, the Hotel Imperial, located on Vienna's Ringstrasse, was originally a residence of Prince Philipp Württemberg. It was converted into a hotel for the world exhibition in 1873.

The Nazis later commandeered it for their headquarters during World War II, and the Russians requisitioned it in 1945. 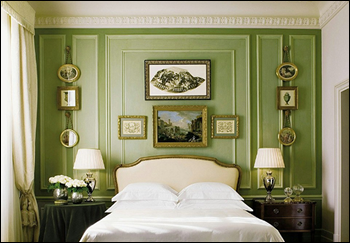 In 1573, Alessandro dei Medici purchased the palazzo built 100 years earlier. He eventually became Pope Leo XI, only to die 26 days later. The palazzo then passed to his sister, Costanza, wife of Ugo della Gherardesca in whose family the palazzo remained for centuries.

The Della Gherardesca family eventually sold the Palazzo to the Viceroy of Egypt, who in turn sold it soon after his harem was barred from living there.

Italy’s first major railway company used it as its main office in 1885 as did the Società Metallurgica Italiana, which took it over in the 1940s.

By the last decade of the millennium, Four Seasons Hotels had taken over management of both palazzi and restored them under the close supervision of the Artistic Historical Patrimony and the Ministry for Fine Arts and Culture.

The hotel opened in 1867 as a pensione and has gone through a number of owners as well as names. The hotel took on its present name, Londra Palace, in 1973.

Among its distinguished guests, Russian composer, Tchaikovsky composed part of his Fourth Symphony while staying at the hotel in December 1877. He nicknamed the symphony Do Leoni for the two lions that symbolize London and Venice.