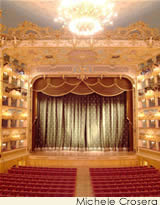 Teatro la Fenice, translated as Phoenix Theater, is a fitting name for a theater that has risen from the ashes after being twice destroyed by fire -- once in 1836 and again in 1996. Following the 1996 fire of Teatro la Fenice in Venice, architects and builders took painstaking care in renovating it. Today, it again takes its place among the great opera houses of the world.

The Teatro la Fenice in Venice was restored to its original splendor, with a marble fa?ade, inlaid wooden floors, frescoed ceilings and gilded mouldings. The design expanded the audience space allowing for 176 more seats and added a room for rehearsals and chamber performances. Teatro la Fenice also boasts a new state-of-the-art lighting and sound system.

One of Italy's oldest theaters, La Fenice in Venice was the site of many notable premieres such as Verdi's La Traviata (1853) and Rigoletto (1851).


See also:
La Traviata - Venice Opera and Hotel Package
What to Wear to the Opera