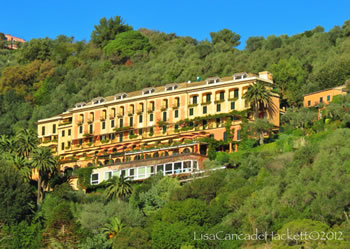 Part of the appeal of traveling to Europe is experiencing, first hand, history spanning hundreds of years. Italy, already one of the world's most popular tourist destinations for its ancient Roman ruins and Renaissance art, plans to reveal more of its cultural heritage by converting abandoned buildings into luxury hotels.

Some of the buildings to undergo extensive renovations to transform into luxury or boutique hotels include Santo Stefano prison on an island in the Bay of Naples; a seafront castle south of Rome; Poveglia, which was once a mental hospital; a bishop's palace; among other sites.

While these particular properties are yet to be restored, the practice is not uncommon in Italy. In fact, it's possible to book a stay in a converted property today.

If you seek peace and quiet on your journey, stay in a converted monastery or convent. A 17th century monastery designed by Baroque architect, Borromini, now stands as the Donna Camilla Savelli Hotel in the Trastevere neighborhood of Rome. The simple bedrooms of the nuns were restored to their original elegance with paintings from the 1600s as well as wood doors and ceilings. The cloister serves as a courtyard for breakfast.

In Fiesole near Florence, the renowned Villa San Michele sits on a hill in a converted 15th century Franciscan monastery. With a garden covered in glass and iron, Victorian-style greenhouses, panoramic views and a swimming pool, this hotel, owned by the same company that manages the Hotel Cipriani in Venice, sets the standard for luxury.

Another restored monastery operating as a hotel is Monastero Santa Rosa Hotel, a 17th century property that overlooks the Gulf of Salerno from high atop a cliff's edge. In addition to the luxury hotel, it features a full day spa making it easy to imagine this locale as a place of refuge and reflection.

Beyond convent and monastery conversions, country houses turned into vacation rentals ranging from simple properties on farms to luxury villas set in the middle of a winery can be found throughout Italy.

Castello Banfi Il Borgo in the town of Brunello near Siena, for instance, served as a house for field workers from the 18th century. Today's owners retained the rustic exterior, while renovating the interior for luxurious comfort. You'll have the experience here of staying at a working winery.

For those who wish to experience the history of the nobility, the owners of Castello di Vicarello, an 11th century castle, transformed the property into a luxurious Tuscan boutique hotel with modern design touches. From its beginnings as an aristocratic residence and an expansive farm, Castello di Casole is now a luxury property set among 4,200 acres of rolling hills and Tuscan vineyards.

In Bologna, the second-highest medieval tower, the 900-year old Torre Prendiparte, was once a prison converted into a two-bedroom suite with 12 floors and a roof terrace.

The most popular of the converted hotels in Italy are palaces. Among the many throughout the country, Hotel Tornabuoni Beacci in Florence, offers two floors of a converted 15th-century palazzo with antiques and rooms with views. In Rome, you can opt to stay at Leon's Place, a 19th-century palazzo in Rome near Termini station that features a contemporary style with black velvet and lacquer furniture as well as a crystal chandelier. Also, Al Ponte Antico Hotel in Venice is a restored 16th century palace set along the Grand Canal.

See also: Disused castles, prisons in Italy to be converted into luxury hotels