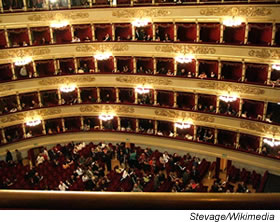 The Teatro alla Scala, or La Scala as it is often called, was built, on the former site of the church of Santa Maria alla Scala, to replace the Royal Ducal Theatre, which was destroyed by fire in 1776 during carnival. Designed by a neoclassical architect, La Scala opened on August 3, 1778 with Antonio Salieri's opera L'Europa riconosciuta.

The 266-year-old theater has become a preeminent performance venue for opera and ballet stars, composers and choreographers. Choreographer Carlo Blasis (1795-1878), ballerinas Maria Taglioni (1804-1884) and Fanny Elssler (1810-1884), as well as composer Giuseppe Verdi (1813-1901) all rose to fame during their tenures at La Scala.

The theatre has undergone a number of renovations – in 1867 for remodeling, in 1946 after World War II because of bomb damage and later from 2002 to 2004 to improve the building’s structure and sound quality. In addition to having a new stage and larger backstage, the seats today include monitors that allow audiences to follow the opera in English, French, and Italian. There are new tapestries, freshly discovered Venetian marble floors, and red velvet covering the gallery and box seats.


Backstage Tours of the opera house