For a rich, authentic experience of Italy and some easy day trips from Rome, there are a handful of towns to tour that are less than a couple of hours away from Rome. Each place has a character of its own - from small hill town charm to ancient Roman ruins. No matter which one you choose to visit, you’ll come back with stories to tell.

The emperor Hadrian built his villa near Tivoli at the beginning of the 2nd Century A.D. More than a villa, it is a complex larger than most college campuses with baths, temples, libraries, and gymnasiums.

Reproductions of classical sculpture and architecture can be found at Hadrian's Villa. The most notable among them is the Canopus, a long pool surrounded by colonnades and sculptures. Today, it is filled with water to provide the visitor a taste of what this royal retreat looked like during Hadrian’s time.

Guided day trip to Hadrian’s Villa from Rome are usually combined with a tour Villa d’Este as they are only four miles apart.

Cardinal Ippolito d’Este (1509-72) built the grand Renaissance palace of Villa d'Este at Tivoli, but the fountains here are the real draw.  Imagine all the fountains you have ever seen then multiple that by a hundred. 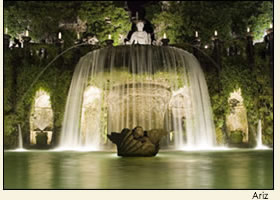 The fountains at Villa d'Este begin on one end of this football field-sized garden where a huge pool is fed by man-made waterfalls. The network of fountains then cascades along staircases, meanders down to ponds, plays birdsong, and mimics rain. There is even a fountain that once played music when water flowed through it. Unfortunately, it doesn’t work today, but there are hundreds of other fountains, sculptures and pools to enjoy during a day trip to Villa d'Este at Tivoli from Rome.

Tree-lined walkways and cool breezes over the water make Villa d’Este in Tivoli a relaxing escape from the bustle of Rome.

How to get to Villa d'Este at Tivoli: Take a guided tour to Tivoli from Rome departing from your Rome hotel or take the Blue COTRAL bus from Ponte Mammolo stop in Rome. Get off in downtown Tivoli.

Orvieto is everything you imagine a small Italian hill town to be -- charming houses overlooking the rolling hills of Umbria, 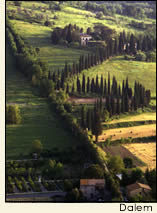 narrow cobblestone streets and a relaxed pace of living. It’s a place to be savored.

After a scenic drive from Rome, you start your day trip to Orvieto by taking the funicular, a train car pulled up the hill by a steel cable, up to the entry of the town. You then stroll along the Orvieto streets passing tiny shops as you make your way to the Duomo, the heart of this charming city.

The Duomo in Orvieto, constructed between 1290 and 1330, is a prime example of Gothic Italian architecture. The façade grabs much of the attention with its mixtures of reliefs and mosaics of gold leaf. They were slowly added year after year, decade upon decade, until the entire church became an epic canvas of innumerable biblical stories. The interior of the cathedral contains frescoes by Luca Signorelli, including Last Judgment (1499), which is considered to be his masterpiece.

How to get to Orvieto: Book a guided day trip to Orvieto from Rome that includes hotel pickup or take the train from Rome's Termini station.

Ostia is an ancient Roman port city that used to sit at the mouth of the Tiber River. Over the centuries the meandering Tiber abandoned this once bustling port.  With no river and in the wake of repeated sackings, the flourishing trade city died. But today the Ostia's structures are amazingly intact.

The excavation of Ostia in the early 20th century, uncovered roads, houses, and shops that are so intact that you will feel as if you’ve stepped back in time. The ruins of the thermal baths are still lined with mosaics. Even the ancient restaurant still contains its marble counter and the wall painting of the food that was served there.

During a day trip to Ostia Antica, you'll visit the Decumanus Maximus, the ancient amphitheater. You can enter the stands and sit in the same stone seats where the Romans were entertained.

How to get to Ostia: Book a guided group tour of Ostia from Rome or take the Rome-Lido subway from Piramide metro station in Rome and get off at Ostia Antica.